Yes to Assertive, No to Aggressive by Tom Hastings 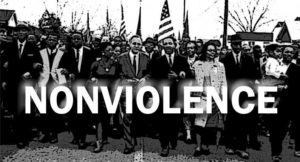 I teach and write in the field of Peace and Conflict Studies, with a special focus on strategic nonviolence. It is a rich field, growing in its scholarship and its widespread usage. I’m so enthused by this—the more we wage our conflicts with nonviolence the lower the costs.

Counting the costs of conflict, we normally think of blood and treasure, of casualties and expense. We are slowly beginning to also count other costs, including our environment, our relationships, our civil rights, our human rights, our metrics of democracy, and more. Nonviolence is superior to violence in every way if we read the research and consider all the costs.

Nonviolence can fail, of course, and in the most robust of struggles—trying to overthrow a dictator, for example—nonviolent struggle only works about 53 percent of the time. Of course violent insurgency only succeeds 26 percent of the time, about half as often as does nonviolence. This is disturbing to those who define revolution as violent. I hope they get over it. Wake up and smell the flowers instead of the cordite…

One secret to nonviolent success is communication. When we are quiet the injustices we see or suffer are allowed to continue. When we are aggressive—either violent or demeaning, threatening, and insulting—that strengthens the resolve of the opponent and progress is unlikely. The best path to victory is assertion—visualize a thin bright line between you and the oppressor. Shrink back from the line and nothing changes. Charge over the line and all defenses spring into counter-aggression, counterattack. But go up to the line with insistent civil assertion, creative and resilient, and your chances for winning your objectives are radically increased.

These principles are basic, but ignored all too often, as we see in many conflicts domestic and transnational, in families and workplaces, in neighborhoods and in towns, in regions and states. The destructive, adversarial conflicts that result are often heartbreaking to observe. From a belligerent North Korean dictator to a misogynist Donald Trump, the results are not impressive. Ruling over others is a poor path to sustainable gains and doing so in an aggressive manner will only generate pushback. If that resistance is civil but insistent, assertive but not aggressive, it can achieve what no one thought possible.

If I had predicted publicly in 1985 that the Philippines would see Marcos deposed without a single fired shot, that the Berlin Wall would fall in a massive nonviolent uprising, that Nelson Mandela would be liberated and apartheid would end without a widely predicted bloodbath, that Pinochet would fall in Chile to mass nonviolent power, and that Slobodan Milosevic would create horrific wars in the Balkans but would be deposed by nonviolence, I might have been diagnosed as delusional.

These cases and 1,000 more are chronicled in a Swarthmore database that is growing constantly. We are humans—we have great big brains that are hard-wired for all possible responses, from violent to nonviolent, which makes us the unique species neurologically capable of infinite, illimitable choice. Let’s be wise about it.