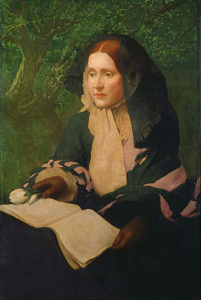 Every year in May, peace activists circulate Julia Ward Howe’s Mother’s Day Peace Proclamation. But, Howe did not commemorate Mother’s Day in May . . . for thirty years Americans celebrated Mother’s Day for Peace on June 2nd. It was Julia Ward Howe’s contemporary, Anna Jarvis, who established the May celebration of mothers, and even then, Mother’s Day was not a brunch and flowers affair. Both Howe and Ward commemorated the day with marches, demonstrations, rallies, and events honoring the role of women in public activism and organizing for social justice.

Anna Jarvis’ vision of Mother’s Day began when she organized Mothers’ Work Days in West Virginia in 1858, improving sanitation in Appalachian communities. During the Civil War, Jarvis convinced women from both sides of the conflict to nurse the wounded of both armies. After the end of the war, she convened meetings to try to convince the men to lay aside grievances and lingering hostilities.

Julia Ward Howe shared Anna Jarvis’ passion for peace. Written in 1870, Howe’s “Appeal to Womanhood” was a pacifist reaction to the carnage of the American Civil War and the Franco-Prussian War. In it, she wrote:

“Our husbands shall not come to us, reeking with carnage, for caresses and applause. Our sons shall not be taken from us to unlearn all that we have been able to teach them of charity, mercy and patience. We, women of one country, will be too tender of those of another country, to allow our sons to be trained to injure theirs. From the bosom of the devastated earth a voice goes up with our own. It says: Disarm, disarm! The sword of murder is not the balance of justice. Blood does not wipe out dishonor, nor violence vindicate possession. As men have often forsaken the plough and the anvil at the summons of war, let women now leave all that may be left of home for a great and earnest day of council.”

As time went on, Congress approved the annual commemoration of Mother’s Day in May, and businessmen quickly capitalized on sentimentality and eradicated the powerful calls-to-action both women intended in the original Mother’s Day concepts. Anna Jarvis’ daughter would campaign for years against flowers and chocolates, seeing clearly the commercialization of honoring women and mothers would lead us further from the call to take action.

Consider these stories as the wheel of the year turns around. By next May, perhaps you’ll find a way to honor your mother for her social and political activism, her engagement with resolving injustice, her care for the sick, elderly, or infirm, or perhaps even her staunch opposition to the carnage of war.

uthor/Activist Rivera Sun, syndicated by PeaceVoice, is the author of The Dandelion Insurrection, Billionaire Buddha and Steam Drills, Treadmills, and Shooting Stars, the cohost of Love (and Revolution) Radio, and the cofounder of the Love-In-Action Network. She is a trainer and social media coordinator for Campaign Nonviolence and Pace e Bene. Sun attended the James Lawson Institute on Strategic Nonviolent Resistance in 2014 and her essays on social justice movements appear in Truthout and Popular Resistance. www.riverasun.com